(The National Finance Center is the "poster child" for Successful Data Center Reconstitution.) 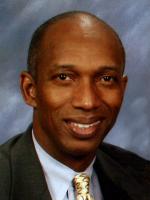 Calvin W. Turner Jr. is the Director of the National Finance Center (NFC). Mr. Turner joined NFC in October 2011, as the Deputy Director, and most recently, he was the Acting Director.

Prior to joining NFC, Mr. Turner had more than 20 years of leadership experience in the banking industry with Whitney National Bank, Hibernia National Bank, and the Federal Reserve Bank. He was also an Associate Instructor with the University of Phoenix at the New Orleans campus, and he was the owner of two small businesses.

Mr. Turner is active in the community and frequently volunteers as on-air talent with WYES TV/Channel 12 Public Television to help raise money with their pledge drives, and he has served on the boards of numerous local community organizations.

Mr. Turner has a Master’s degree in Public Administration and an undergraduate degree in Business Management and Communications.