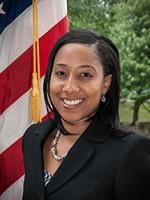 Prior to working at FirstNet, Bernetta served as the Web Manager for the U.S. Department of Agriculture (USDA) where she engaged in department- and federal-wide initiatives in support of the Secretary’s priorities and the White House’s Digital Government Strategy and represented the department on several working groups, committees, sub-councils, and web communities while also serving as liaison to USDA’s 29 agencies and offices.

Bernetta has an extensive background in public service. At the Transportation Security Administration, U.S. Department of Homeland Security she led critical web efforts and provided emergency web response to terrorist incidents and other national crises.

Today, with more than 15 years of public service, she is honored to serve throughout the federal government managing federal websites and teams, including the U.S. Department of Commerce, Minority Business Development Agency, U.S. Department of Education and U.S. Department of Housing and Urban Development. She has participated in numerous events and campaigns across the public sector, most recently with the White House, State Department, and National Aeronautics and Space Administration to help inform and engage the public via social media.